One of our customers is a digital musician, and was putting together a package of hardware to take to gigs. For live music, they use a software package called Bitwig Studio on their MacBook Pro, presently running the latest version of the MacOS – 10.13.2 – “High Sierra”.  As a simple control surface for this stripped-down live music package, he wanted to use a M-Audio Ozone.  The Ozone is an old, discontinued keyboard / MIDI controller and has the added benefit of accepting a balanced XLR input from a microphone.  It’s a nice bit of kit and exactly what was required.  Unfortunately – M-Audio no longer support it.  In fact, when looking more closely at the problem it appears that they haven’t supported it for quite some time – MacOS 10.7.3 to be exact! (Link here).

Never being one to take “not possible” at face value, I decided to have a go anyway.

The first thing that I did, was to download the drivers for 10.7.3 and simply give installing them a go (Download from here).  Unsurprisingly, this didn’t get me too far with the result being a terse “The Installer could not install the software because there was no software found to install.” Riiiight! 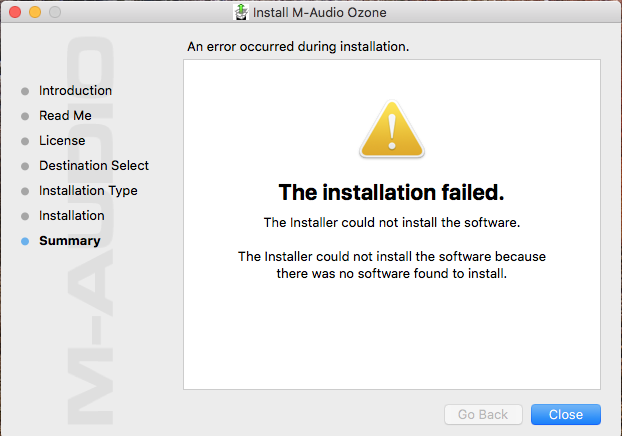 Next up came an inspection of the package contents.  If you’re unfamiliar with the process for this it’s accomplished by right-clicking (secondary click, ctrl-click, whatever) the package file and selecting “Show Package Contents”. Poking around inside showed that the “driver” consisted of a .plugin, a host of associated UNIX executables and a Preference Pane.  In short, nothing that should be too closely allied to the underlying operating system.  As a result, I took the stance that the failed installation was due to “rootless” – a feature of the MacOS since El Capitan.  In short “rootless” prevents ANYTHING, even the root user (hence the name) altering the contents of /System, unless it’s being done by a Software Update or a signed installer from an approved developer (FYI, this wasn’t one!).

You can, should you wish, disable “rootless” (or “System Integrity Protection” to give it its correct name) but it’s not a great idea to do so since it’s a valuable security feature.  Instead, you can use a clever app called Pacifist.

Pacifist is a Swiss Army Knife for packages and installers, and it allows you to process the contents of an installer manifest whilst bypassing any checks that the installer itself might force upon you. 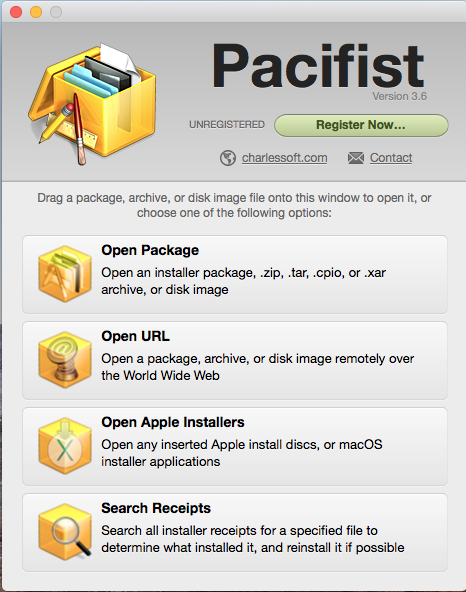 Pacifist is Shareware, which means you can use it for free indefinitely, but you’re morally obliged to pay for it if you feel it’s useful.  It’s only $20 too, so if it saves you throwing away some very expensive older M-Audio hardware then surely that’s money well spent?

When you “Open Package” in Pacifist it allows you to install the contents of the package and I did just that.  Before installation it detected 8 out of the 44 files specified by the installer were present on my system.  Afterwards?  All 44 present and correct – time to reboot!

The system rebooted with no seeming ill effect, and it was time to test if the Ozone was available for use by the system!  Firstly, I headed to system preferences, and was pleased to see the little Ozone preference pane there waiting for me.  I opened it up, and whilst it loaded without crashing system preferences, it seemingly couldn’t talk to the Ozone:

Disappointing, but not wholly unexpected.  After all – this preference pane was for a version of the OS some 6 major revisions older then that which it was running on!  The real proof of the pudding would be in whether its audio interfaces were available to the system, and if it was talking MIDI to my Mac…

To test both of these I called upon Apple’s built in “Audio MIDI Setup” and the excellent “MIDI Monitor” by Snoize (Link Here).

Firstly, to my delight, Audio MIDI Setup showed the Ozone as providing 2 inputs and 2 outputs over USB – result! 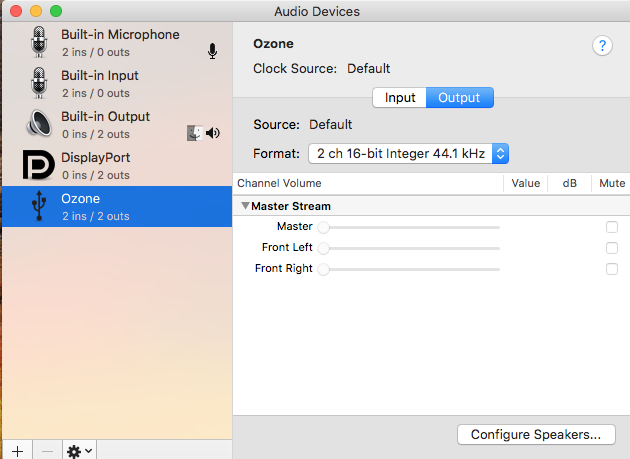 Secondly, MIDI Monitor detected the Ozone as “Port 1” (useful for configuring Bitwig Studio later, that) and more importantly detected MIDI control input when I pressed keys and altered other inputs on the control surface!  Time to fire up Bitwig Studio and see if it will play ball.

Bitwig Studio is able to detect many modern MIDI controllers, although none by M-Audio.  This doesn’t matter particularly though, as it’s able to be configured for any device that talks MIDI to the computer.  You do so by going to Settings –> Controllers –> Add controller manually.  The profile I chose for the Ozone was “Generic / Keyboard + 8 Device Knobs (CC 20-27)”.  I did so because the Ozone is a keyboard (2 octave), with… you guessed it… 8 rotary knobs for controlling MIDI parameters!  I then selected “Ozone Port 1” from he dropdown for the MIDI source to actually listen to for this controller and we were seemingly good to go. 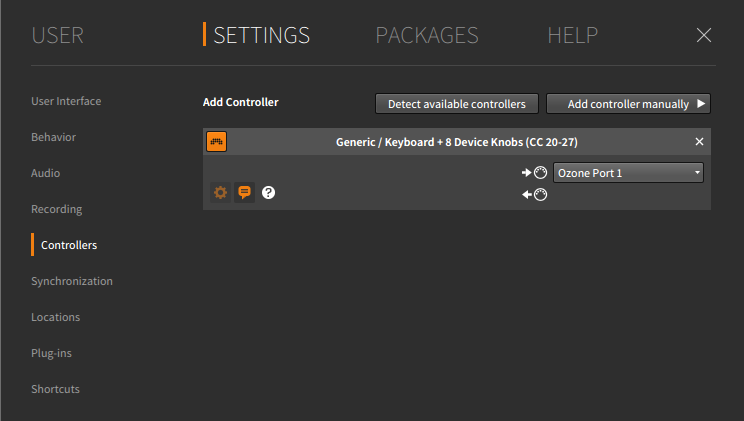 I loaded up Bitwig’s rather excellent Polysynth module and was able to play!  Furthermore I could select a control element of the synth and map it to one of the 8 rotary controllers on the Oxygen by simply right-clicking it and selecting “map to controller or key” Bitwig then cleverly waits for you to make a change on any one of the Ozone’s control inputs before assigning that input. Genius!

So I guess the message here is simple enough… Just because a manufacturer has given up on a piece of hardware, and just because nobody else on the internet has succeeded in getting something working there’s no reason for you to give up!