So I’ve been guilty of the cardinal sin: I’ve ‘fixed’ something that wasn’t broken.

On Cyber Monday recently, I was sent an advertisement recommending that I move to PlusNet for a very attractive price – £25.99 per month including line rental for their unlimited 80/20 FTTC package.

At the time I was paying closer to £50 per month with BT Broadband, although I was completely satisfied with the service.  In the two years I had it since VDSL came to our area (I was the second customer on our exchange/cabinet to order the service!) I’d never had a single problem with my home broadband.  I’m less than 200m from our cabinet, and getting a reliable 76Mbps down and 18.9Mbps up.  This is perfect for my family’s needs, and positively interstellar performance compared to the 6Mbps down and 0.8Mbps up I was getting prior to Summer ’16!

Firstly I did a bit of reading on PlusNet.  They are a Yorkshire based ISP, recently swallowed up by BT and used by them as a “value” brand.  Fine by me, I didn’t need any of the pointless frills that I got through my BT Broadband.  Their back-end network was Openreach (as with most FTTC ISP’s), so I’d be getting the same service for less.  I gave BT the opportunity to price match to avoid the faff of porting the service over but they weren’t interested.  I made the switch.

The switch itself was hassle-free.  They mailed out a router that was clearly a rebranded BT Hub 5.0 (in white with lurid pink highlights) and the service switched over by 10am on the day that they said it would.  All seemed well with the world.

And then… buffering.  First it was the kids noticing it on Netflix.  Then Facebook videos would stutter where Facebook videos hadn’t stuttered before.  Rebooting the hub would solve the problem, but sooner or later (usually after a week or so of continuous usage) it would come back.

Like most people who work in the tech industry, I keep my kit at home fairly vanilla.  I didn’t want the expense or unnecessary functionality of a Draytek 2860 or a Billion BiPAC 8800 so I had a dig around to see what might be amiss.  The first thing I noticed was fairly consistent packet loss (about 10%) across the connection which I was surprised at.  Granted it wasn’t something I’d had recourse to check with BT Broadband, but when troubleshooting customer systems from my home office it wasn’t uncommon to leave a ping running against a remote host – as long as the remote host was healthy I’d never seen symptoms of packet loss.

And yet here it was, rearing its ugly head. Anyone who’s used a Home Hub 5.0 will know it doesn’t exactly shower you with diagnostic feedback, but I was able to see it was synced at 80/20 as expected.  I ran a speed test to see exactly what I was getting over my previously rapid results.

3.9Mbps down and 16 Mbps up! It doesn’t take the insight of an expert to see that that was decidedly wayward, so I rebooted the router and tried again – 55Mbps down and 16Mbps up.  Better – adequate, even – but I knew that the connection was capable of more.  The connection as far as the exchange was good, and I’m very close to the nearest FTTC cabinet.  I knew that the ISP’s core network was fine – Openreach doesn’t present that much variability across the ISP’s that use them for backhaul, and reviews online showed favourable results from other Plusnet users.  Equally puzzling was the fact that I was (to all intents and purposes) using the identical router for Plusnet and my former service.

A quick bit of digging revealed that I wasn’t.  My former router was a HomeHub 5.0 revision B and Plusnet’s “HubOne” was in fact a HomeHub 5.0 revision A.  The Revision A uses a Lanteq (formerly Infineon) chipset, whilst the Revision B uses Broadcom.  This had the hallmarks of a smoking gun, so I investigated a bit further to see if there was a mismatch between my modem’s chipset and that used by the DSLAM at my FTTC cabinet.  This shouldn’t make a difference – a standard is a standard, right?  Still, it’s well known that Infineon chipsets have performance problems with Broadcom DSLAMs, and I distinctly remember the FTTC cabinets coming in big whacking Huawei boxes when they were being installed by Openreach.  Huawei FTTC’s use Broadcom DSLAMs.

Being a geek (shocking news, right?) I had to confirm this via un-necessary application of nerd skills so I used a hacked Huawei HG612 modem to query the DSLAM.  Early adopters of FTTC broadband in the UK will instantly recognise the HG612 – it’s the white “fibre modem” that BT shipped with their Infinity product until the functionality became part of the Home Hub itself.  They look like this: 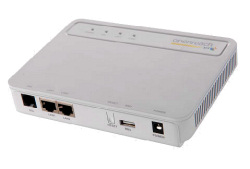 So then, replace the cruddy HubOne with a Broadcom-boasting alternative. The Draytek and Billion routers mentioned earlier use a Broadcom chipset, but they cost £150+ and are overkill for my needs. The TP-Link VR-900 is well though of and a bit cheaper but still overkill – I have a perfectly satisfactory gigabit network with an Apple Airport to manage my wireless. Then it dawned on me – why not recycle my older BT HomeHub 5.0 Rev B?

Being a consummate hoarder I still had it stashed in my box of “needful things” in the garage, so I plucked it out, hard reset it and punched in the settings required for my plusnet connection.  I fired it up, it synced and connected.  The result?

76Mbps down and 18.9Mbps up – exactly as I was receiving before.  So far it’s only been in use for 24 hours, and the packet loss and slowdown only appeared previously after extended usage but the signs are good.